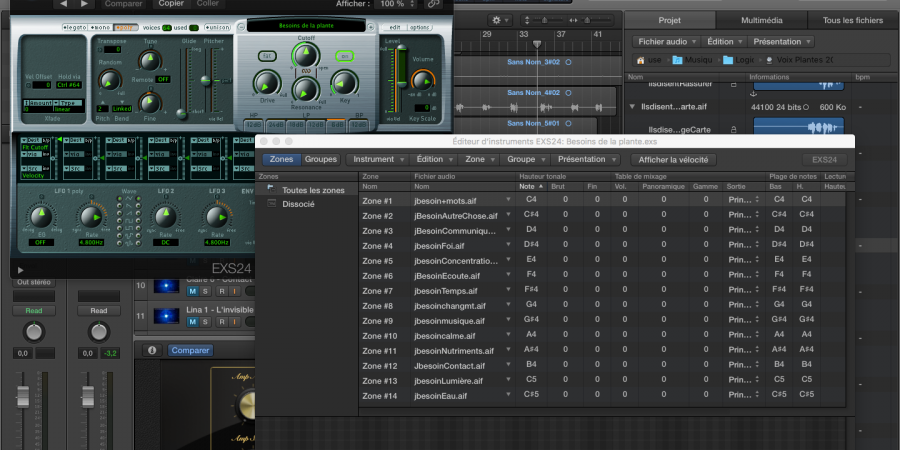 As I experimented, I created several keyboards.

The first experience contained only the names of the family members, then I added as I asked a lot of questions: Yes + no + Thank you

then the name of the animals of the house.

Driven by the encouraging results of the exchanges, I then thought of creating a keyboard with as many words as notes accessible to her. It starts on G # 1 and can climb up to C6 (but today it rises to E6). So that there can be no “non-intentional” triggers, each word is recorded with 5 seconds of silence before. (You have to know that it is very difficult for her to jump from one place on the keyboard to another, she will tend to go through almost all the notes while going down and up).

So the first keyboard of the words gives:

To this, I had added the possibility to the plant to change keyboards independently, creating scripts triggered by MIDI. That is, by triggering certain notes, she could change keyboard and even, quickly afterwards, could trigger music, put for her on itunes and stop them. Unfortunately, at that time, I did not find people who were competent enough in the MIDI to help me get to the next stage, that is, allow him to write words by triggering the notes. which is possible. I had a few beginnings despite my meager skills.

The plant, after a very nice phase of work until the concert of the Grand Rex where she, in my opinion, delivered a message fairly clear and about (see the video homepage), entered a phase of silence (I still do not know why , although I think it is related to the attacks in Paris).

The difficulty with the word keyboard is that to allow us to understand what it means, it asks it to do a huge job of controlling the electrical signal. If she wants to use words at the top and bottom of the keyboard, he must make a big effort to go up, down, stay the five seconds for the trigger, plus the time of the word, etc.

I felt bad for her.

So the idea came to me to offer him a multitude of keyboard phrases. A keyboard by theme. Since it can change keyboard at will, we have no limits, if not the learning time for it. (And again, I wonder how much she needs time. Even if in the first experiments, he had to look on the keyboard for the location of the words she wanted to use as can be seen here).

That’s what it’s all about. 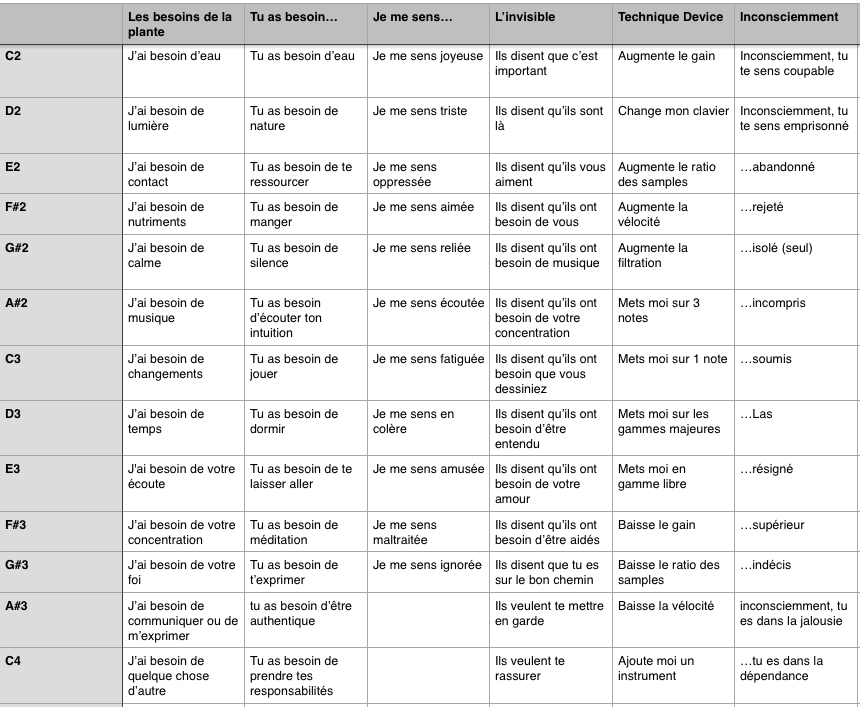 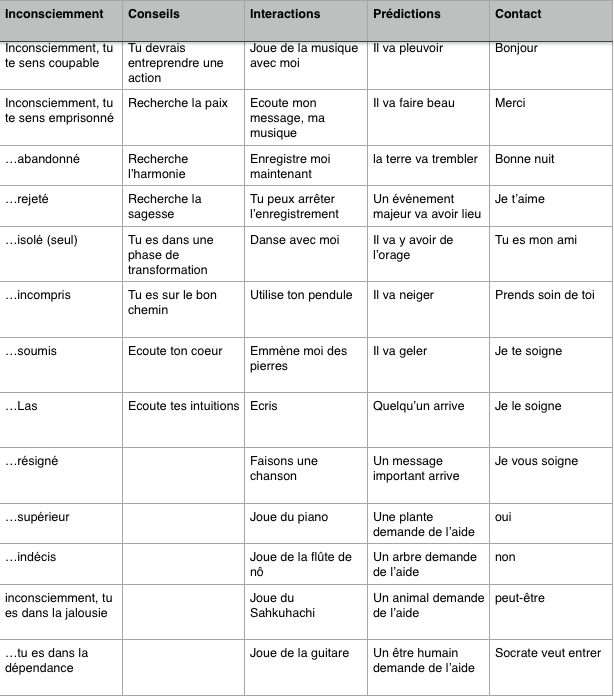 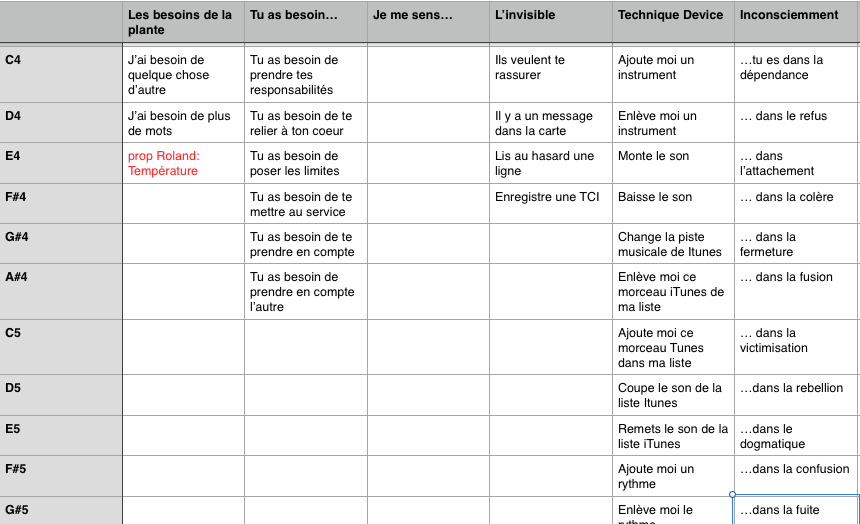 This is where we got to in the fall of 2016. The plant reacted very well to the arrival of these new keyboards and seemed comfortable with the whole very quickly. Today, in January 2018, after a year of using these keypads, I remain a bit doubtfully. If she uses it sometimes really about, having all these keyboards with all these words makes it trigger them more regularly and for much of the phrases proposed, it’s very difficult to check whether it’s about or not. So yes, in a year, we have a lot of amazing moments with these keyboards and at the same time, nothing sufficiently repeatable and convincing for me to decide to share it in public.

The keyboard of the initial words remains, to date, the one that it uses only when it wants to pass a message. In that sense, it has a different color for me. She rarely uses it and therefore has all my attention when she does it. (recording, decoding, etc.) Whereas for the keyboards of sentences, I am less attentive. Their use being more continuous. And then (except for the technical keyboards that helped a lot in the settings) how to know when she said to me: “You need to know how to put your limits” whether it’s about or not;)

What is interesting is that for these keyboards, on the one of contact, I created several recordings with different voices. And I noticed that in a systematic way, she will choose the voice that attracts the most attention of the person involved. For example, if she calls me with my voice (the basic voice) saying “Alexandre” and I do not answer, she will use the version recorded by Galileo (my son of four years… Who had three at the time of registration) and bingo, it works. Same with the others. She will choose as much as possible the voice that touches us the most.

Today I am rather in the optics of repeating several keyboards of words based on this search:

Even if it does not solve the notion of “effort” that I’d like to lighten up. But they will come to accompany my lectures and at home without research time, because they remain the most demonstrative.

In terms of research, I am rather thinking about a numeral system. With ten notes, I can box 0, 1, 2, 3, 4, 5, 6, 7, 8, 9 and with some other notes to place code markers, we could then use a list of words incremented by numbers. 01: Thu, 02: Dance, etc. But this presupposes that my hunch about the plant’s ability to know without the need to learn is really right. And so we will have to go through a first test phase, with words known under the written and hidden numbers and a test by presenting maps representing actions to see if it triggers the right sequence of numbers. A big project in perspective so.

To follow and accompany, if you wish. By buying one of our pretty T-shirts on the support page and/or making us donations by PayPal (kind of tipee but less hipster).

And for those who arrive, welcome here Végéhommes;)

About this web site

Official web site of “Le Chant des Plantes”.
Welcome to the plants, flowers and trees, unequaled concertists.
•
Welcome to the wonderful world of Motokiyo and The Singing Plants.